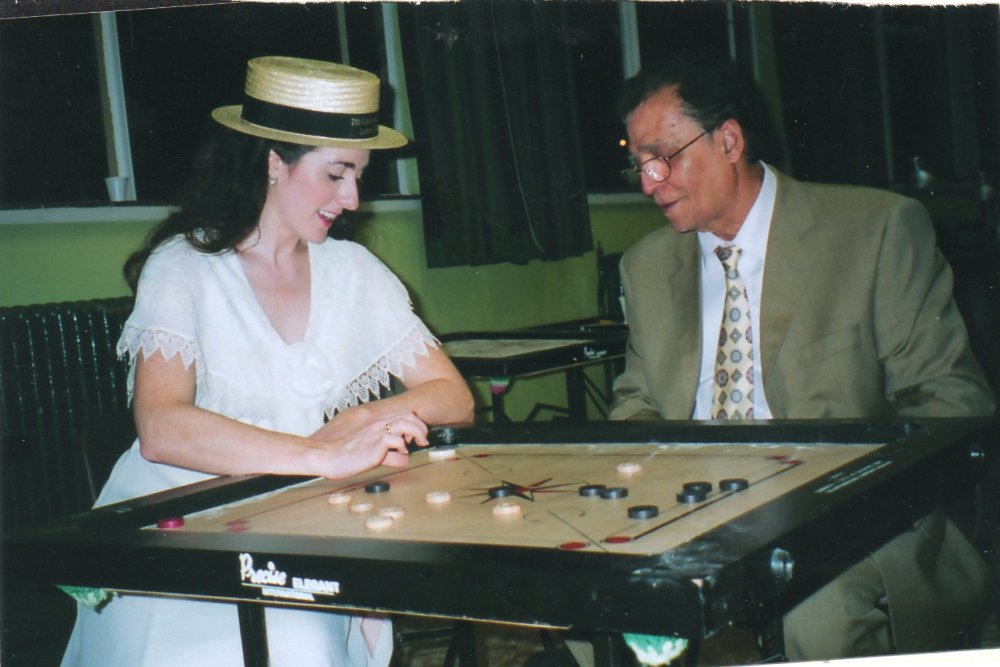 Manager of the German Team

( Office of the All India Carrom Federation)

Umpires are being instructed how to conduct matches during the World Championship.

Anil Kumar: But Sir, if any player pockets all his coins...

women. Women are always discriminated. Even Carrom should be men`s monopoly.

Kidwai: Should we call them Carromwomen?

Secy. General: No, no, you cannot change it. The term is given by the ICF Congress at Male.

The decision is final. You may bring amendment in the Laws of Carrom , in the next Congress.

Sheila Devi: Sir, you always make changes, discriminating the women. That is why there are very few top women players.

Kidwai: Sheila Devi, we have Queen in Carrom. We don’t have King, or Maharaja.

Sheila Devi: Even that too seems to be too much for you.

Anil Kumar: Sir, you may call man, woman, Mr., Mrs., Lord , lady, Monsieur, Femme, Mademoiselle,Khatoon, Janab, Srimati, Sriman …….. Whatever you may like. But my question was different. I simply wanted to know if a player has pocketed all his Mr or Mrs, Sri or Sriman why dont you call it century any more?

Secy. General: No, no, no, not Century, not hundred. It is slam.

Secy. General: No, no, not Royal or Grand Slam. Days of Maharajas and kings have gone. It is simply White Slam and Black Slam.

You should not create confusion.

Have you not passed the International Umpires Examination?

Look you are umpire, umpire. Arn´t you ? Your task is umpiring according to the Rules of the I.C.F. and not to argue.

Anil Kumar: You are right Sir. You are the Secretary General of the I.C.F., but when I passed the examination at that time there were no men running on the Carromboard...

Kidwai: We had a game of 29 points. There was no limit of boards. The Queen had 5 points. She was counted up to 23 points.

Secy General: But in those days International Tournaments were not taking place.

Sheila Devi: We still give 5 points for pocketing Queen.

Anil Kumar: No madam, the days of monarchy have gone. Now the importance of

Queen is reduced to 3 points only.

Secy. General: Sheila Devi, you are International Umpire. You must know the new Rules!

Sheila Devi: How do I know Sir, you are changing the rules every day.

Anil Kumar: The game is losing the charm. In our days, when I was U.P. Champion, players were not allowed to hit the opponent´s coin, I mean Carrommen, directly. Nor you could hit directly if the piece was on your base line or under base line or on the arrow of your side.

Secy. General: OK. Mr. Kumar, then show me if you can easily pocket such Carromman.

I am putting it under your baseline near the border. Now try.

And now I will show you how difficult but nice shots are possible by thumbing also.

to start. You have come here from different parts of India to conduct the matches. Players from Sri Lanka, Maldives, Germany, Switzerland, Holland and India will be here, in this Indira Gandhi Indoor Stadium. And you are fighting on Rules, ...if the Carrommen are male or female.

Kidwai: Take them as common. Call them as persons. Afterall terms such as Spokesperson are very common these days.

Anil Kumar: OK. Sir, but now let us play Carrom. We have been discussing the whole day. During the World Championship we will have no chance. We will have to watch others playing. Let us atleast play today.

Sheila Devi: Let us have doubles. Mr. Babu you should be my partner.

Anil Kumar: I take Mr. Sharma. Kidwai, you do umpiring.

Kidwai: Why should I? You be umpire. Let me play.

(Players take their sides. The Carrommen are arranged on the board. Powder is spread on the Carromboard and the game starts.)

(A park near the house of Umpire Anil Kumar.)

(Anil Kumar is sitting comfortably on a bench. Some people are walking. Anil doesn´t take notice of them. He is reading the International Laws of Carrom)

Anil Kumar:Umpireshall mean an official appointed to supervise and/or control a

Cannon, Cannon, Cannon means placing a C/M, (as if a Chief Minister) ...within the Outer Circle...Why outer Circle?...Let it be...) near another Carrommen..., (no Carrom man) and or Queen in such a way that there is space and the existing C/M faces the general direction of a pocket.

Boy: Daddy, daddy, Mama is calling. We are waiting for lunch.

Girl: Papa, you have not taken even breakfast. Mama is making Puri...Come!

Anil Kumar: Go, go...I am coming. And look, send Mohan to drycleaning. He should bring my blazer. I need it for umpiring.

(Children go back. Anil continues reading the International Laws of Carrom, making gestures. A beautiful woman comes walking, stops near Anil Kumar, puts lipstick on her lips, looks her face in a small mirror and comes closer to Anil Kumar).

Woman: Excuse me. What is the time?

(The woman goes away)

Mrs. Kumar: We have been waiting for lunch. The food is now cold. What the hell you are doing here. No breakfast. No lunch. Only siting in the park…

Chipu is weeping. you promised her to show film today. Amitabh Bachchan`s film. Children are waiting.

Anil Kumar: My dear in two days we have World Championship. I have to conduct matches, international matches and you want to go to cinema. There are top players coming from Switzerland, Germany, U.K. and Holland

and you want to see Amitabh Bachchan.

Take this money. You can take the children to cinema...

Mrs. Kumar: My God...what a madness! No I am not going without you. Who will drive. Please come soon. We are waiting.

A player shall be liable to lose if he smokes or smells foul while at play due to intoxicating drinks and or is under the influence of drugs....

Anil Kumar: (continues reading)...disturbs and distracts the attention of the opponent. (with gestures)...while at play more than twice, despite umpires warning...

(Anil Kumar calls him and asks him to massage his head and shoulders, but continues reading the International Laws of Carrom)

(While doing massage the Malishwala begins to sing)

(The First Round of the 1st. World Championship is about to finish. Only two players- a German and a Dutch are left in the hall playing on a board. Umpire Anil Kumar is conducting the match. Another referee is assisting with the timer in his hand. Chief Referee is sitting on a distance in front of his desk. Some Carrom officials are watching.

Umpire Anil Kumar takes the toss. Cleans the board with a brush.)

Umpire: First Round of the First World Championship. Singles Event.

First game of the match. First board. On my right hand side

Mr. Ingosoponohloz from Germany and on left Mr… ….from Netherland.

(Umpire asks German player to arrange the C/m for Break.

The player is nervous. He fails to arrange C/m properly. Umpire asks him to correct again. In spite of many attempts the player fails. Umpire doesn’t know what to do. He tries to explain the German player to properly arrange the C/m. The player doesn’t understand him.

German Sir, the coins are not of the same size. I cannot help if there are gaps

Player: between the Pieces.

(The German player hits so hard that his striker jumps and falls down on the floor and breaks. The match stops. Umpire goes to Chief Referee and informs him about the incident.

Chief Umpire: Your player has broken his striker. Have you another striker? You may give him.

Manager: Here it is.

(The manager gives his striker)

One Official: This is heavy Sir, over weight, more that 15 grams.

Manager: It can´t be over weight. I have bought it here.

Official: No Sir, this is fifteen and half gram. It cannot be used in the match.

Manager: What the hell…I don’t have another one.

Chief Referee: OK. I am giving you my own striker. I am using it for thirty years. Please return it to me immediately after the match. Tell your player not to break it.

Manager: Ofcourse you will get it back.

(Dutch player pockets his black C/m and touches the pocket.)

(One C/m is taken out and given to German player for placing. He places the penalty C/m keeping his striker in the hand.)

(The player looks at the face of Umpire. Also the Dutch player is upset. Umpire

asks the player to play.

Player: Sir I don’t smell foul. I have not taken alchohl or any drug. I don’t smoke even.

Umpire: No, you had the striker in the hand, while placing a penalty c/m. This is foul. OK. Play.

Dutch player: (stops) Sir, the penalty C/m is not placed.

Umpire: Foul! You didn’t demand before. Now you are disturbing.

Umpire: Foul! You have striker over the border of the board. This is not allowed.

(The Dutch player tries to take out the penalty C/m from the pocket:

Dutch player: Sir there is no white in the pockets. ( He takes out his own C/m and shows to umpire).

Only white is there.

Umpire: Foul! You cant touch the pockets and cant place a wrong Carromman.

player: Sir, is this correct?

(The German player tries to remove a hair from the board. Umpire declares foul)

Umpire: Yes please.? What you mean?

(Umpire tries to take out a C/m but the pockets are empty. Secy.General of the ICF goes to umpire)

Secy. General: Mr. Umpire, which board is this? Three hours have gone. Public is gone. It is now 2 O´clock in the morning. The hall is to be closed. In few hours the new round of the matches will be starting. Please try to finish soon.

Manager: Mr. Babu…one should not be so strict. The Rules are new to players.

Secy. General: Please don’t tell me. I have nothing to do with umpiring. You may officially protest.

The protest must be written, signed by Manager or Captain and submitted to Chief Referee along with fees.

Mr. Manager we all want to make this World Championship successful. Our International Federation is very young. It has been established only in

1988. You were one of those who have established it. Your country should give maximum cooperation. Only then we can make it a strong Federation and carrom can

become an olympic discipline. This all depends on your cooperation. Therefore please don’t argue unnecessarily. Don’t be upset. Follow strictly the rules. In Olympics also the rules are followed very strictly.

Manager: My God! Every thing so formal…

Anil Kumar: This is World Championship Sir, not a friendly match!

(The Dutch player touches the C/m.

(The German player crosses arrow with his elbow. The Dutch player points out the foul. )

(The second umpire is sleeping. Chief Referee is snoring. Few umpires are sleeping on the floor. A sweeper is cleaning the floor. Umpire Anil Kumar is tired and almost sleeping. Only the dutch and the German players are active.)

player: Sorry Sir, my striker has fallen in the pocket.

Dutch player: I have pocketed my last C/m leaving the Queen on the board.

Umpire: Go on, continue playing. (sleeps on his chair)

player: There is no black Carrommen left on the board. (shouts) I have won.

(Umpire falls down from his seat, gets up and declares in confusion)

(Umpire shakes hands with both players) 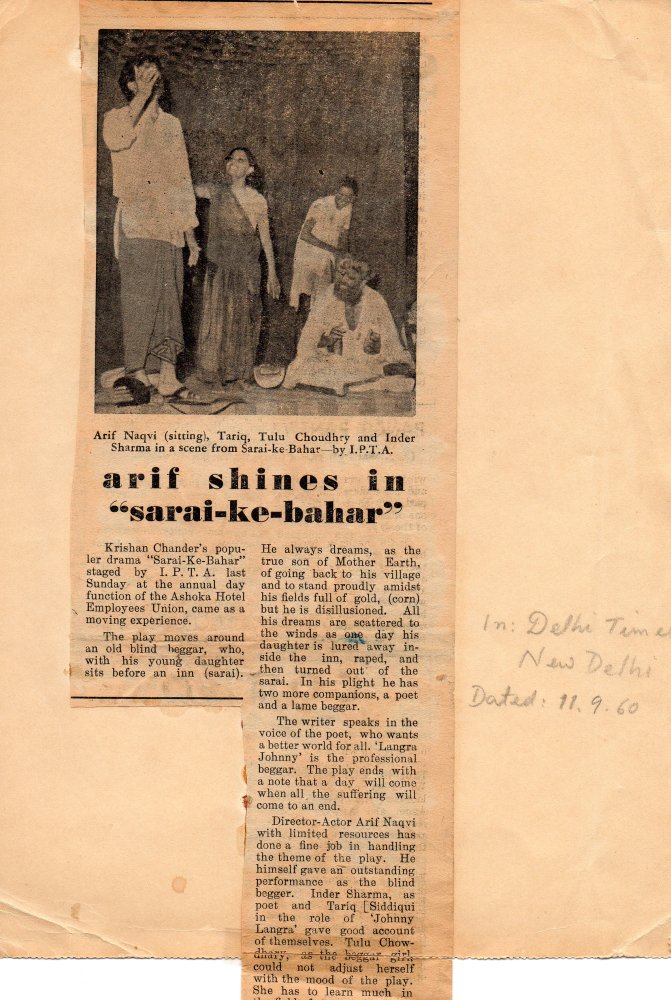